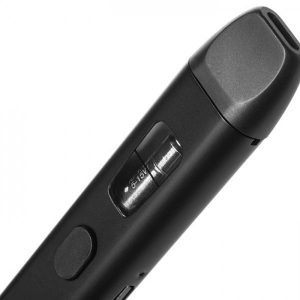 The VaporFi Air 2 Mini is not like your ordinary e-cigarette. You can use it to vape both e-liquids and herb oils. It is also recommended for both beginners and advanced vapers. If you want a really stealth vape kit with great performance that can easily fit into your pocket or purse, look no further.

The VaporFi Air 2 Mini comes with a 350mAh non-removable battery with a maximum wattage output of 15W. A micro USB charger is included in the package to charge the device. The charging port is on the side of the vaporizer. This means you can use it while it is charging. However, be warned that doing this will cause the battery to charge at a slow pace.

The VaporFi Air 2 Mini has a tank capacity of 1.4ml. The tank is quite easy to clean, and it comes with a fill line, so you know when to stop to avoid spit backs and flooding. To access the tank of this vaporizer, you have to remove the mouthpiece. VaporFi has creatively designed the mouthpiece of this vaporizer to be used as a screwdriver to remove the atomizer. The atomizer sits on top of the tank.

As stated earlier, the VaporFi Air 2 Mini can be used to vape both e-liquids and herb oils. It comes with two 1.1 ohm stainless steel atomizers. One of the atomizers can only be used for e-liquids, and the other is for oil concentrates. Both atomizers are labelled clearly so there’s no chance you’ll mix them up. The inbuilt LED light will notify you if the atomizer short out.

The VaporFi Air 2 Mini does not come with any OLED screen. Therefore, you do not have to worry yourself about things like Ohm, temperature, wattage, and the likes. You can turn the vaporizer on and off by clicking the power button five times in quick succession. It does not come with adjustable air slots.

Although VaporFi Air 2 Mini is a small device, it performs very well. You’re going to get smooth hits off this vaporizer. 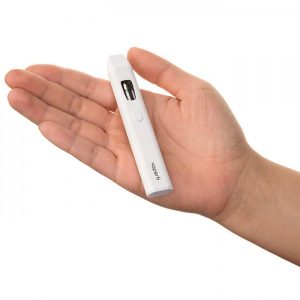 The VaporFi Air 2 Mini is ridiculously cheap. You can get this vaporizer for only $19.99 from the VaporFi store and top vape stores. It comes in black or white color.

VaporFi is one of the top e-cig brands for 2017. The company has earned a reputation for creating high-quality vaping products. Besides creating vape devices and accessories, this Miami-based company is also the producer of some of the best e-liquids on the market. Some of the company’s popular e-liquid blends include Miami Vice, Sahara Gold, and VaporFi Grand Reserve Catch Ya Latte.

It is important to note that you can’t use any replacement parts for the VaporFi Air 2 Mini as the device was uniquely designed. But no need to worry since you can buy extra e-liquid and oil atomizers from VaporFi.