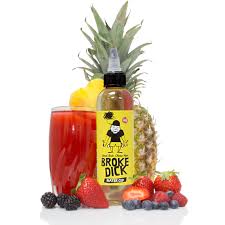 The name itself is actually pretty catchy and would actually attract people to see what product it sells. The name “Broke Dick” may seem green to some, but it just simply describes the manufacturer of makes e-juices for those vapers, who are broke and would like to purchase a cheap e juice of good quality. Simply put, Broke refers to those who have no money, and Dick is the nickname of the owner, whose real name is Richard. The company has a monopoly-like cartoon as the brand’s trademark. The juice usually comes with its trademark monopoly card, which makes this brand easy to remember even if it is your first time using it. It is also easy on the eye with just the right shade of yellow as the background for its logo and the traditional black-and-white character that we see on the monopoly sets. The e-liquid comes in 120 ml gorilla bottles. The only downside to this packaging because it does not come with a screw cap. You need to transfer it to unicorn bottles, if you have some empty ones at home, or you can transfer the screw cap of one of your empty containers to their bottles.

The profile of the Prepaid e-juice describes it as a juice full of juicy blueberries, strawberries, raspberries and luscious watermelon for a tropical kick. The was actually pretty smooth with the raspberry, strawberry and watermelon mixing. Although the raspberry cannot be distinctly identified, it is still  great, all in all. The sweetness of the e-juice was not too much, although the smell of the juice had said otherwise. The raspberry was pretty dominant when you take a hit, especially during the inhale, but it did not taste unnatural, so that is a plus. The strawberry mixed nicely with the watermelon on the exhale, giving the juice the sought-after mixed berry taste. There was also a bit of mint on the exhale, which gave a pretty nice touch. The mint balances out the sweetness of the fruit without be overpowering.

For a 70/30 ratio, the juice made pretty decent clouds. Although they may not be competition type, it does have a full body, that can linger in the air for quite awhile compared to other e-juices of the same class. The scent of this was not too sweet nor overpowering. It was more of a mild fruity smell lingering in the air even after the clouds clear up. The clouds were full-bodied, which made it an e-juice that can be suitable for beginners to practice their cloud tricks.

Broke Dick’s Prepaid E-juice a very satisfactory performance. It may be one of the best cheap vape experiences that I’ve had. For the price of the liquid, it pretty much went beyond expectation. There may a bit of work to be done on the intensity, but for a budget e-juice, this pretty much hits the spot. You can actually enjoy your vaping experience even if you cannot buy a premium e-liquid. I personally may not buy this again, but I would recommend this juice if you are short on cash and need a good liquid. It actually is an above average juice offered for an incredible price.